Do you contribute to iNaturalist? Sue Ann reports on how helpful the community is with identifying mystery creatures she comes across.

Yesterday the weather was beautiful, so Anita, the dogs, and I spent the late afternoon outdoors in Austin. Honestly, I just wanted to get some exercise and enjoy the air, but I just can’t stop with the nature observations. I guess iNaturalist is the winner there!

As we walked the dogs, Anita asked me what a pretty white flower was. I could see it was a type of lantana, but it was not in a spot where anyone would have planted it. So, I submitted it to iNaturalist and hoped for the best.

Last fall, there was a dung beetle invasion at a ranch in Milam County. It’s today’s featured re-blog (we’re waiting for more contributions from our fellow Master Naturalists). 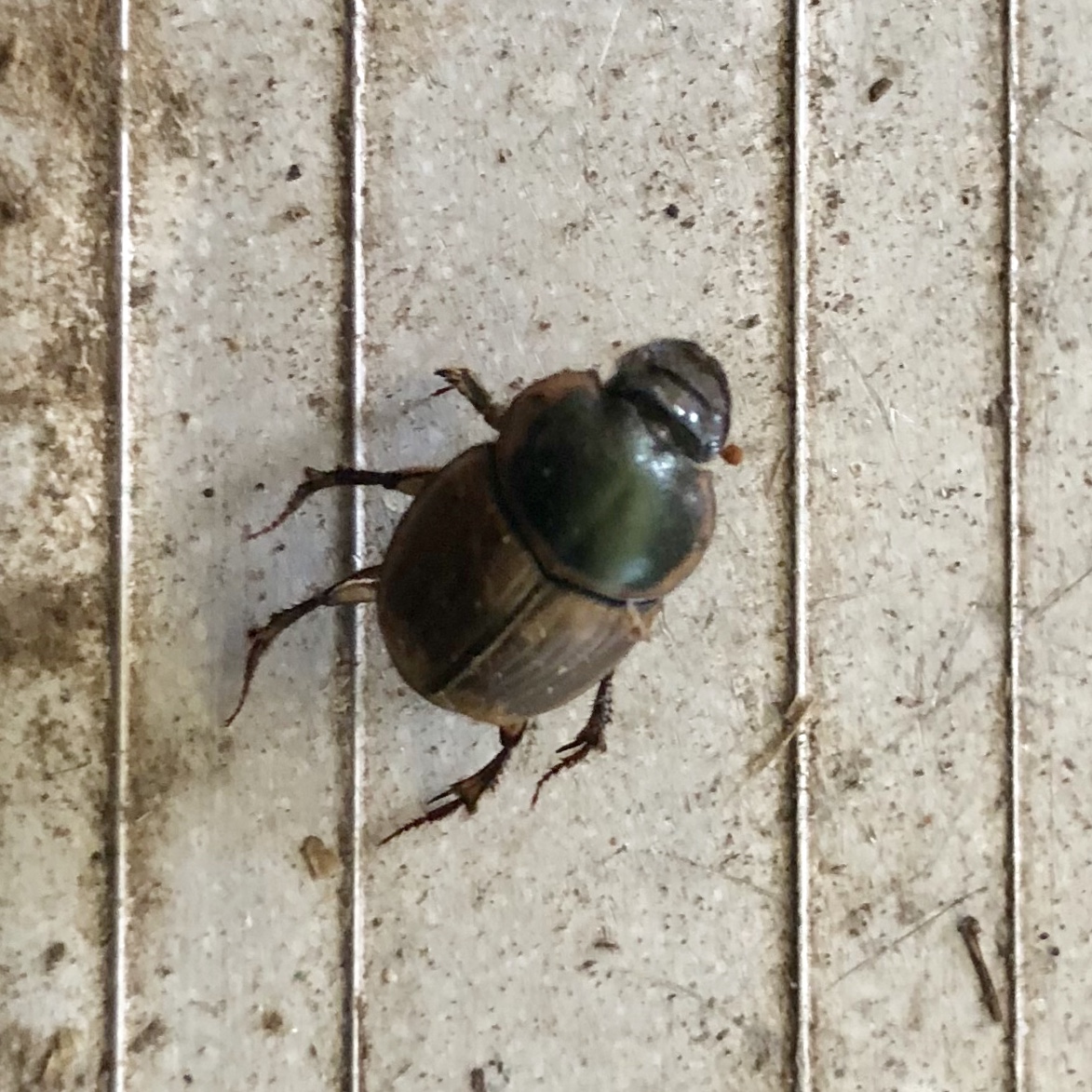 This friendly looking guy is the gazelle scarab beetle. They like to eat poop and attack tack rooms.

It seems like every year we get a different plague. This year’s infestation was quite a surprise. And how it managed to infest our tack room was quite ingenious.

You see, the room where we store all the equine food, saddles, and other equipment may not look great, but it is very well sealed, so that mice and other intruders can’t come in and eat our delicious beet pulp and expensive supplements. It’s also air conditioned, so that the leather tack doesn’t get all moldy and icky.

I recently dropped some black sunflower seeds, and from a distance, they do resemble dung beetles.

So, yes, we were surprised this weekend when what we originally thought were black sunflower seeds that we’d spilled were actually a LOT of dead bugs. I uploaded a…

Those of you who don’t know me in any other context may not realize that I spend half my time in Austin, where I work as a Senior Instructional Experience Strategist (what??) at a software company. I like where I work, because there’s a lovely xeriscaped courtyard full of mostly native plants, nice areas to walk around, and big windows to look out of.

Last April, my boss and I noticed that a hawk, probably a Cooper’s hawk, kept flying around, swooping past the windows on the other side of the building, and disappearing. Now, we often see hawks around here (sometimes in the winter, it seems like every tall light post along the big highway has a hawk on it), so seeing it wasn’t a surprise. The repeated flight path was.

The next day, around 3 pm, a coworker and I decided to walk around the buildings to bring us some energy for a project we were working on. We stepped out of the building, and I said, “Look, Kate, there’s that hawk again.” Then I said, “LOOK, Kate!”

There, in the building next to ours, on top of some railings that look cool to an architect, was a big nest. That’s where the hawk was going! We quickly realized that the reason we saw a hawk so often was that there were two, AND babies.

END_OF_DOCUMENT_TOKEN_TO_BE_REPLACED

Today we’re sharing a post by our member, Suna Kendall, from her nature blog.

It’s a beautiful day today, so I’ve done a bit of wandering around. I’m always surprised at the beauty I see, just walking around the ranch.

Today the dogs and I checked out the arroyo, and they had a lot of fun sniffing and stomping, as usual.

I was surprised to see just how big the armadillo’s hole has gotten. Every time I walk by there’s more dirt outside it. That is one busy dillo.

The trees and bushes are all budding out, and sometimes the color really surprises me. The dewberries are all red and yellow, and look almost autumnal!

The following idea was entirely conceived and designed by Joyce Conner, member of the Texas Master Naturalist program. She has given these “crystals” away at nature events and classes since 2013.

Every winter when my brother and his wife come to Texas to escape the cold and snow in Wisconsin, we women typically do several craft projects. When there is a large enough supply of empty aromatic scent bottles (typically Wallflowers from Bath and Body Works), we make “crystal” hangers to give away.

My sister-in-law Suzy Coose is the talented person. She is in charge of painting dragonflies, birds, flowers, and butterflies on the empty bottles. My grandkids and I usually are her helpers for everything else. This winter Phyllis Shuffield had collected many, many bottles for us, so we got to work getting them ready for 2019 Earth Day give-aways.

The following are instructions, in case you would like to make your own hanging “crystals.” (Since I can’t find my pictures I took this year, I have included some from past years.)